Commuters are set to face weeks of chaos after South Western Railway workers began a strike lasting almost a month.

Workers will walk out for 27 days until New Year’s Day as a result of the dispute after last week’s talks collapsed, with the impact set to hit commuters and Christmas shoppers ahead of the festive season.

The start of the strike has already seen packed trains due to the service being reduced – but just what is the strike about and how many trains are still running?

Here’s what you need to know…

Why have South Western Railway gone on strike?

South Western Railway workers are striking in a long-running dispute over guards on trains.

New trains on the network allow driver-only or driver-controlled operation, but unions have been demanding that guards oversee the operation of doors and perform other safety responsibilities.

South Western Railway has offered a second crew member on every train, but the unions have said they have not had enough assurance of this, and are concerned that the role of guard could be reduced or even axed.

RMT general secretary Mick Cash said: ‘RMT is angry and frustrated that a set of proposals that would have guaranteed the safety critical role of the guard at the point of dispatch, and which would have cost the company absolutely nothing, have been kicked back in our faces.

‘There is no rational explanation for the company position and we can only assume that either they or their paymasters in Government want this strike action to go ahead for politically motivated purposes.

‘The union also believes that cutting the guard out of the dispatch process reduces the second person on the train to little more than a passenger in the longer term, which would give the company the option of axing them all together at some point down the line.

‘Both the union and the travelling public are being set up – and that stinks.’

An SWR spokesman said: ‘We have done everything we can and more to meet the RMT’s outdated demands with our promise of a guard on every train and a safety critical role for that guard.

‘What we are not prepared to compromise on is the much-needed modernisation of the service with improved performance, safety and customer service that our new fleet of modern suburban trains will vitally deliver for customers.

‘We know our passengers will welcome over 10 million more passenger journeys a year arriving on time and this much-needed improvement to our service is too important to compromise.’

What are the South Western Railway strike dates?

Workers are striking from today until 11.59pm on 11 December.

They will then go on strike again from midnight on 13 December until 11.59pm on Christmas Eve.

Are trains still running during the strike? 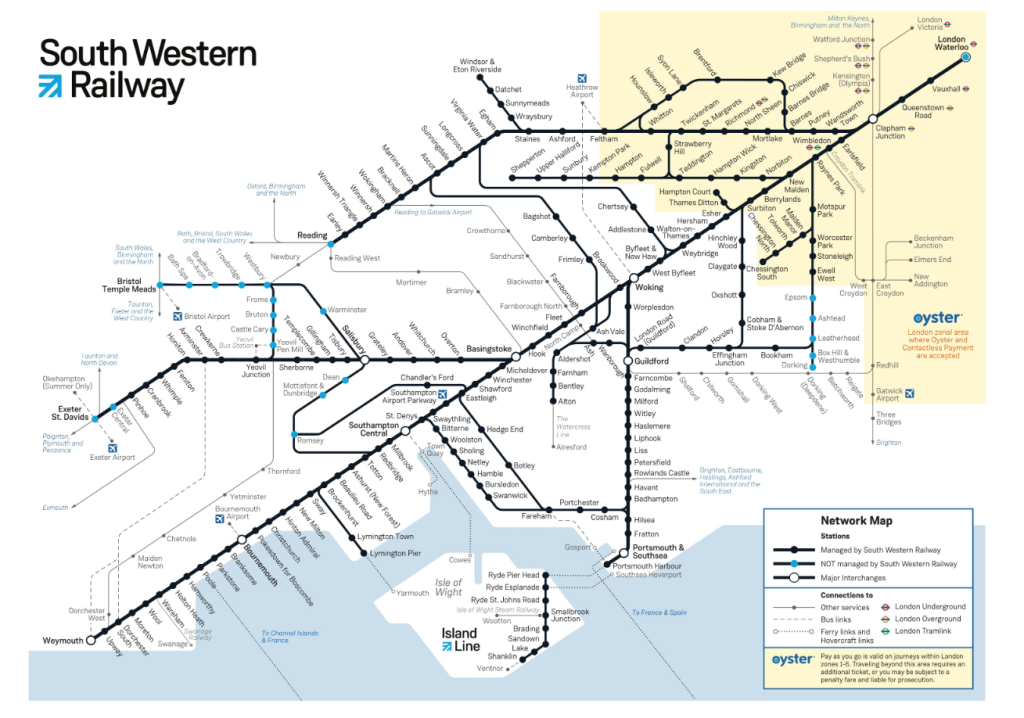 Trains are continuing to operate during the strike but there is a reduced service, and passengers can expect delays and cancellations.

South Western Railway said in a statement: ‘RMT strike starts today and we will be running an amended timetable until the New Year.

‘Peak services will be busier than normal and there may be queues at stations so please plan your journey in advance.’

The company said on its website that they expect to run more than half of their normal Monday to Friday services, and that buses may replace trains on some routes.

The service will also finish earlier than normal, with trains not running after 2300.

Although there is no strike action on 12 December – the day of the General Election – the amended timetable will continue to operate, while there is no service on the network at all on Christmas Day or Boxing Day (as is always the case).

For more information on how to plan your journey, visit their official website.

When will you be able to see the full moon tonight and why is it called a Strawberry Moon?

Happy World Environment Day: What is this year’s theme and what does it mean?

Face tattoos ‘should be banned for people under 21’