There have been another 155 deaths reported from coronavirus, bringing the UK’s official death toll to 44,391

It comes as NHS England said there had been 36 deaths in hospitals reported since yesterday.

Public Health Wales said a further three people had died after testing positive for Covid-19, taking the total number of deaths to 1,534.

Nicola Sturgeon said that a total of 2,489 patients have died in Scotland after testing positive for coronavirus, up by one from 2,488 yesterday.

Coronavirus is likely to have brought forward some deaths of older and vulnerable people which could prompt a period of below-average deaths, the Office for National Statistics (ONS) has said.

More than 55,000 deaths involving Covid-19 (according to the death certificate – not just where there were confirmed tests) have been recorded in the UK during the outbreak, with the virus the main reason for deaths increasing above what would normally be expected for this period. 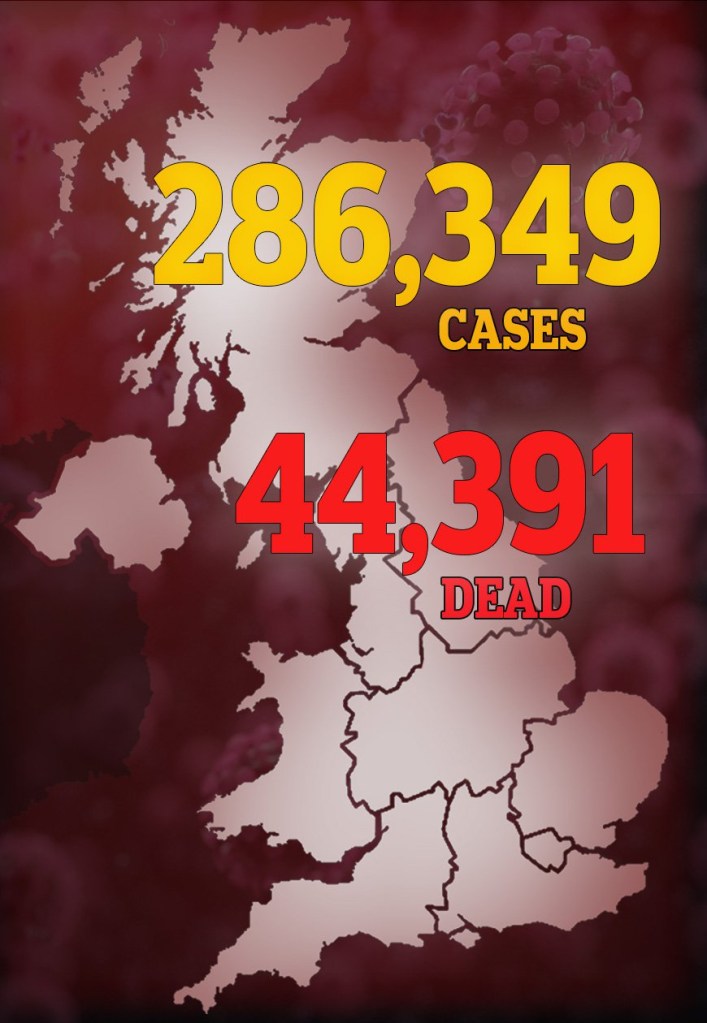 The elderly and those with pre-existing health conditions have been hardest hit by the pandemic.

The ONS said: ‘The disease has had a larger impact on those most vulnerable (for example, those who already suffer from a medical condition) and those at older ages.

‘Some of these deaths would have likely occurred over the duration of the year but have occurred earlier because of the coronavirus.

‘These deaths occurring earlier than expected could mean we start to see a period of deaths below the five-year average.’

Tuesday’s ONS figures show there were 8,979 deaths from all causes in England and Wales registered in the week ending June 26 – 314 deaths fewer than the five year average.

It is the second week in a row that weekly deaths have been below the average for this time of year.

Caroline Abrahams, charity director at Age UK, said the deaths of older people during the pandemic have been ‘catastrophic’.

She said: ‘These most vulnerable people have been at the biggest risk to the virus and should have been better protected on all levels.

‘It would be good to think that the number of deaths will fall over the coming months but we must remain cautious and make sure that our most vulnerable are protected in case there is a resurgence of the virus late in the year.

‘To do this the Government needs to refinance and reform social care so that older people at home and in care homes are safe and adequately cared for.’

Overall in England and Wales, there were 606 deaths involving Covid-19 in the week up to June 26 – the lowest number since the week ending March 27.

Deaths from all causes in all settings were below the five-year average for the week ending June 26, except for in private homes, where 745 deaths were registered.

Get in touch with our news team by emailing us at [email protected].

For more stories like this, check our news page.

Face mask fines soar to £3,200 as government clamps down on illegal raves

Coronavirus nurses’ open letter as she begs for world to help...